oogle Goo was a product sold by Google described as a stress toy.

Goo texture is not unlike plasticine except it is more brittle in its consistency and feel.

Remove Goo from its container and squeeze and mold it in the palm of the hand feels good, relieving stress.

Yes, Goo was a real product

It’s time to get hands-on with a fistful of Google Goo. This stretchy ball of red fun works overtime to decrease stress and stretch your creativity.

It doesn’t stain and it’s non-toxic — and endlessly satisfying to shape and squeeze. Comes in a handy storage tin. Age 3 and over. 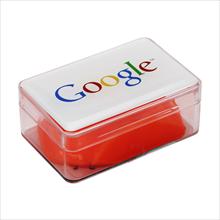 Google Goo was first sold in a round metal tin with a lid (as shown – top right), then in a rectangular plastic container (right) and renamed Silly Putty.

We’re don’t know why it was re-branded Silly Putty, although rumours suggest Google wanted the name GOO for their URL Shortener.

Although Goo is no longer sold in Google Store, it is sold over in our online store.